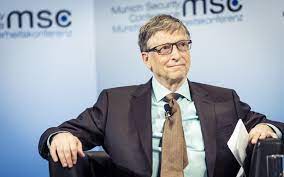 One of the reasons tourists love visiting Turkey is the abundance of fresh, delicious food. The fact it's reasonably priced is a huge bonus: it's easy to pick up a decent meal for just a few lira.

However, if you're billionaire Bill Gates, watching the pennies on holiday isn't quite as important as it is to the rest of us.

The Microsoft founder recently visited Bodrum on a tour of the Mediterranean. After flying into the local airport (on his private jet, naturally), Gates jumped into a helicopter which dropped him off on the helipad of his luxury yacht, Leander.

After a tiki-tour around the shores of Bodrum, Gates anchored off Turkbuku and came ashore with six friends. The group dined at a local hotel, paying US$9340 for for dinner.

The Bodrum peninsula offers some of the most exclusive eateries in the country. Some restaurants will charge $11 for lahmacun, a popular dish of dough topped with mincemeat that usually clocks in at closer to $2.

This wasn't the first time the world's fourth-richest man has visited Bodrum. He last holidayed in the area in 2014, with his former wife Melinda. Gates, who stepped down as CEO of Microsoft in 2000 to focus his energies into a foundation he created with Melinda, has once said that he only began taking holidays when he reached his 30s.

Last April, Gates made headlines across the country when rumours surfaced that he had bought some agricultural land in the country's northwest.

Other celebrities also favour the small peninsula: Tom Hanks, Mark Zuckerberg, Kate Moss and various royals have all holidayed off the coast of Bodrum, their super or megayachts affording them a privacy and comfort most tourists can only dream of.

Fully furnished luxury bungalow style villa for sale in Konacik, situated just 10 minutes away from Bodrum Town Centre and its world class facilities, this property is found in an expansive garden with private living guaranteed.

In the centre of Bodrum, this hotel for sale is just a short walking distance away from the famous marina yacht club and all daily amenities making this an exceptional investment opportunity for those looking to buy a business.