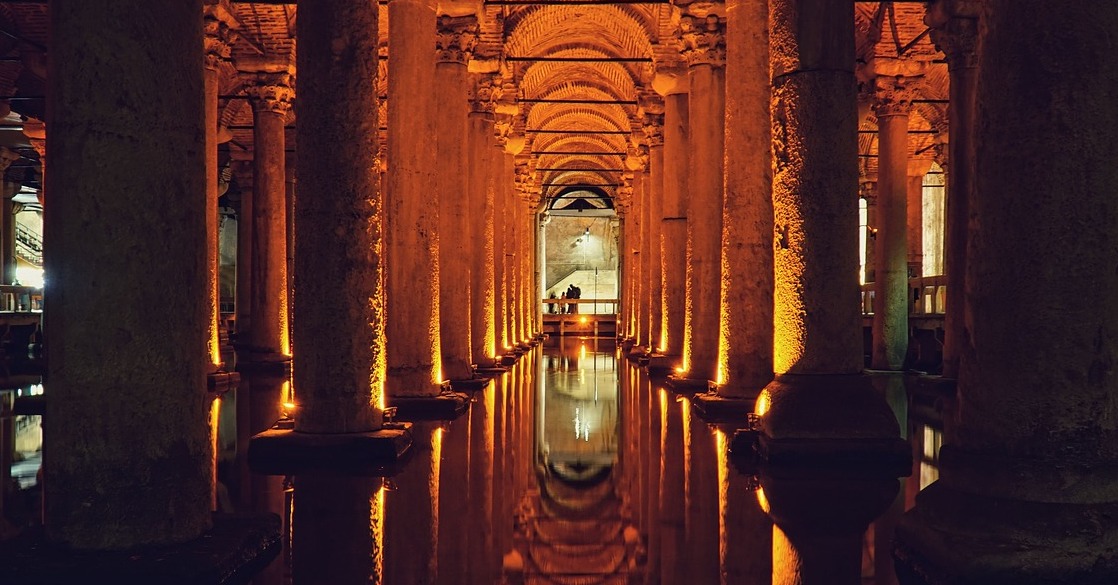 Underneath Istanbul are many old cisterns, with the Byzantine Basilica Cistern being the largest and most well-known. Sitting around the corner from Hagia Sophia, in the Sultanahmet area, it is a strange structure of Istanbul, but worth seeing. Also known as the Yerebatan, James Bond fans will recognise the enormous underground marble pillars Bond famously rowed through in the film From Russia with Love. There is no other building quite like this, and not just because it is underground. Descending those stairs, visitors feel like they are entering another world. The quiet ambience, majestic columns and fish swimming through the waters seem so surreal compared to the busy city streets above.

About the Basilica Cistern of Istanbul

Byzantine Emperor Justinian 1 built the Yerebatan Basilica underground Cistern in 532 to service the water requirements of his Great Istanbul Palace. The historical Basilica Cistern is 65 metres wide and over 140 metres long, and a colossal 336 marble columns hold it up. However, the Ottomans invaded and they didn’t find much use for it. Hence the cistern fell into disrepair and was eventually forget about.

Then, the structure was rediscovered purely by accident by Frenchman Peter Gyllius. Peter was researching Ottoman antiques in Istanbul and was intrigued when people got water from holes in their basements and caught fish! He decided to investigate and much to his surprise, came across the columns. This ancient discovery by Gyllius led to cleaning and restoration, and the Byzantine Basilica Cistern eventually opened to the Istanbul public in 1987 under the Turkish government’s order.

Mark Twain even famously paid a visit and he was delighted

“You are forty feet underground and amid a perfect wilderness of tall, slender, granite columns of Byzantine architecture. Stand where you would, or change your position as often as you pleased, you were always a centre from which radiated a dozen long archways and colonnades that lost themselves in the distance and sombre twilight of the place.”

Entry to Yerebatan Basilica Cistern Museum is via steps under Istanbul city. Once underground, there are several walkways to explore. However, probably the most essential sight to see is located right in the cistern’s left-hand corner, away from the columns. Here you will see two Medusa heads used as bases to the columns. One Medusa head is upside down whilst the other tilts to the side. Why they are here and where they came from remains an unknown mystery, but they are spectacular.

Medusa was a sea nymph who courted Poseidon. They sealed their courtship by making love in the temple of Athena, but when she found out, she cursed Medusa, transforming her into a monster with snakes for hair and such a horrendous face that she could turn people to stone with just one look. So Perseus beheaded Medusa as she slept and used her head as a weapon before presenting it to Athena to put on her shield. The myth says that because Medusa had made love to Poseidon, she beheaded her body split into two forms, winged horse Pegasus and the Golden Sword Crusader.

The great Basilica Museum of Istanbul may seem strange to visit, but the incredibly cool structure provides respite from the sun on hot sunny days. The Basilica’s functions and uses are also interesting to learn about, whilst marvelling at the fabulous columns that have held this up through the water over time.

Also About Travel in Istanbul

Hagia Sophia and Blue Mosque: Sitting around the corner from the Basilica Cistern, the Blue Mosque and Hagia Sophia are two more must-see attractions in Istanbul. Both iconic landmark buildings date from the Byzantine and Ottoman empires and are global treasures. Both are fully functioning places of worship, but tourists to Istanbul can visit anytime outside of prayer. This article talks about why you should go and what to expect.

Famous Buildings in Istanbul city: As well as the Sultanahmet district, there are other places in Istanbul with famous landmark buildings worth seeing. From the Galata tower, mosques, museums, and streets all portray an intriguing insight into Istanbul, both past and present. This article talks more about them and why you should visit after seeing the famous Yerebatan Basilica cistern.