Ronaldo kicks off era of 4.5G superfast mobile in Turkey

The ad shows the 30-year-old Portuguese footballer, who plays for Real Madrid, losing speed halfway through a game. The only fix is to visit the Turk Telekom offices to be fitted with a 4.5G chip - which brings him back up to superspeed.

While it’s not as critical as food or water, these days most of us consider a fast web connection to be up there with life’s greatest necessities. The days when 3G or 4G did the job are long gone. We want fast video calls, seamless video viewing, efficient downloads and transfers and most importantly: we don’t want to pay the earth for it.

It’s looking like we’ll have to wait until 2020 for the much-anticipated 5G technology. But in the meantime, for those who aren’t willing to wait (and who is, these days?) we have a temporary solution: 4.5G.

4.5G technology is set to “explode” this year, according to telecoms giant Huawei, who predict that more than 60 commercial networks will roll out across the globe over coming months, catering to a global audience who are set to use five gigabytes each month in the years leading up to 2020 with three billion devices.

4.5G will allow for data rates of over 1000 Mbit/s - ten times faster than 4G rates. The increased speeds will not only mean better quality mobile video and cloud storage, but increased scope for technology which has before now been the stuff of science fiction, like virtual reality. 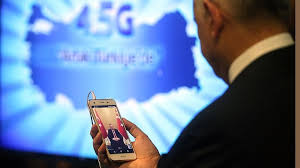 Fastest network in the world

Turkish mobile giant Turkcell officially rolled out 4.5G at midnight on March 31, allowing its customers all over the country super-fast data. The roll out has prompted interest from all quarters - as well as consumers, who are signing up to the new technology in their millions - investment is tipped to grow in the market, which will boost the economy as well allow Turkey to further improve its technology infrastructure.

While Turkey might not be the first country that springs to mind when you think “advanced mobile technology” figures suggest Turkey is ripe for 4.5G technology. Of its 77 million population, the number of cell phone subscribers currently sits at around 72 million, with 61 million 3G users, while broadband subscribers number some 44 million - an increase of 38 million from 2008.

The launch has brought Turkey into the global technology limelight. Offering the fastest LTE (Long Term Evolution) speeds available today, the country has also achieved an incredible feat: offering the 4.5G network to consumers over a 783 thousand square kilometre area.