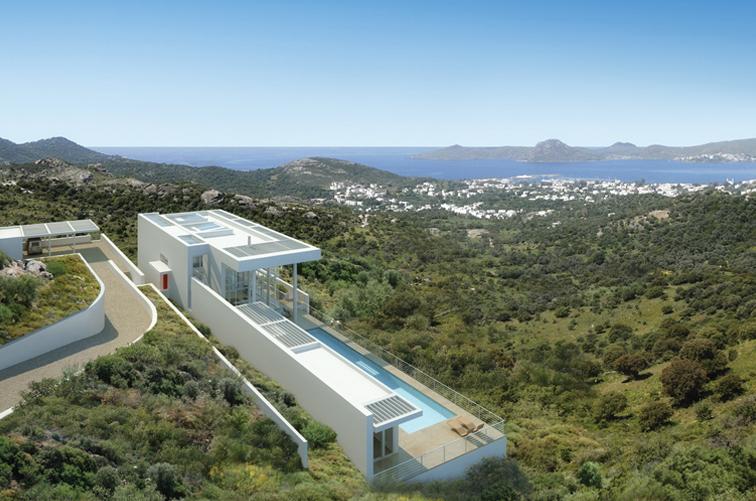 Excitement is mounting with the rumours that a high-profile celebrity is about to buy one of Bodrum peninsula’s signature properties.  Celeb obsessives and tabloid journalists had their interest piqued after spotting one of the world’s most expensive super-yachts off the coast of Yalikavak. This interest turned to a lather of excitement with the news that a high-profile celebrity visitor had visited the exclusive Richard Meier villa in the area with a view to purchase. Naturally, everyone’s putting two and two together and coming up with four: a glamorous new addition to Bodrum.

Commentators are running through a list of potential names, high-profile suepr-yacht-lovers who have previously holidayed in Yalikavak. Bill Gates quietly moored his superyacht here a couple of years ago. Fellow superyacht owner Roman Abramovich is a regular fixture in the harbour. Yves Saint Laurent, Rudolf Nureyev and the Jaggers are all Bodrum fans. But no one is sure who the mystery yacht belongs to.

The yacht in question has certainly set tongues wagging. The 126-metre vessel is the Privilege One, an undeniably luxurious super yacht that rolled out of production just this year. The yacht’s features include room for six cars, four motorcycles, eight jetskies, two helicopters and even a submarine. There’s a pool, a ballroom, an auditorium, a number of bars (including a sushi bar) and ornamental touches featuring precious stones and metals. Needless to say, the price tag for this yacht could probably wipe out third world debt and you’d still have enough to buy up a street on London’s Mayfair. So it’s easy to see why the mere sight of this vessel has created a flurry of excitement.

As for the property, a clandestine visit three nights ago by a group of suits in sleek cars has caused Bodrum residents to wonder if a new neighbour might soon be moving into one of the Richard Meier residences.

Bodrum Houses, Richard Meier’s vision for Bodrum, is located on a Yalikavak hillside and built over 115,000 square metres. Each of the project’s 23 houses is set within a huge 5000 square metre plot overlooking the Yalikavak Bay and the new Palmarina development.

Due to the topography each house’s design is slightly different, although each has a private pool and the same incredible views. There are five different types of house here. It’s not known which one our celebrity friend viewed but each of the designs is, of course, steeped in utter luxury and worthy of the world’s top movers and shakers. Each house has three levels and a private pool area, a covered three-car garage and a separate guesthouse. Each house is built over around 1,100 square metres and is designed to meld into the dramatic topography and also to experience utmost privacy from its neighbours. And, of course, the most striking aspect are the simply incredible sea views; out over the bay and the endless sea, dotted with islands.

An outdoor staircase leads directly into the foyer of the house, which opens onto a two-storey living room, a breathtaking space full of light and sky and sea views. The living space is organised around a fireplace and chimney, lending the space a cosy feel.

From this space large glass doors open onto the private pool, which is laid with marble and surrounded by natural decking. A superb place to relax on a sunny day.

Each house has a large dining area, a modern kitchen with the latest fittings, three en suite bedrooms, an extra bathroom and a media room.

The houses’ simple design is underlined by the materials used. Each residence is finished with plaster and there are huge expanses of windows and skylights - designed to emphasise the blue sky views and Yalikavak’s sunsets, famed locally as the most beautiful on the peninsula.

The home’s minimal design features stone and hardwood flooring to create a simple look that’s cool in the hottest months of the summer.

In 2006, international investment company Berggruen Holdings saw Bodrum’s burgeoning potential and bought 168,000 square metres of land in Yalikavak. They then hired world famous architect Richard Meier to design a series of unique properties that took in the incredible view.  New York-based architect Meier himself is top of his field, winning some of the world’s most prestigious architecture awards. His most well known designs include the Getty Center in Los Angeles; the Frankfurt Museum for Decorative Arts and other civic and private buildings all over the world.

When Berggruen Holdings made their initial 2006 investment little did they know how it would pay off. Since that time Bodrum property prices have doubled and Bodrum has become one of the places to see and be seen. So it’s hardly surprising that high profile visitors are now seeking to make their love affair with Bodrum a permanent one.

Who is the mystery visitor with the superyacht? Carlos Slim? Bill Gates? Will Bodrum’s profile be raised even more as a new billionaire takes up residence in a luxury Bodrum villa? And the biggest question is: for how long will they be able to keep their identity a secret?

To know more about Bodrum Houses by Richard Meier, please do not hesitate to contact us quoting reference 'Bodrum Houses'